Hello guys, if you are new to programming world, looking for your first Job in software development, particularly for Python developer, and looking for frequently asked Python interview questions then you have come at the right place. Earlier, I have shared best Python courses, books, Python projects, best place to learn Python and many interview questions on Data Structure, System Design, OOP Programming, and Recursion, which are essential topic for any programming interviews, including Python Developers and Engineers and in this article, I am going to share Python questions. These are the questions about Python programming language, Python tools, and Python eco-system in general.
These questions are used to check your knowledge about Python programming language and whether you have worked in Python or not. If you have really worked in Python then you can easily answer them very easily but if you need your first job, its better to be prepared as you don't want to lose that hard earned chance, even if you have not worked in Python in real world.
Just practicing Python coding problems and questions is also ok, all you need to do is demonstrate that you know Python and your ability to learn and adapt, rest you can leave into hand of almighty God. I have tried to cover key concepts in these Python interview questions like how to install Python, Pip package, Python data types as well as basic programming concepts like function and recursion.
I have also tried to cover things about Python packages, python modules and key python library like NumPy which is very popular on Data Science and Data Analysis space. Though, I have not cover Django and Flask which are also quite important for web development in Python, may be I can add few more question on that if you guys need.

It is time now to bounce back after failing your python Automation Engineer interview. The only mistake you did was that you didn’t prepare yourself well enough. If you want to pass this coming interview you have to make sure you don’t repeat the mistake you did last time.
What you have to do now is to adequately prepare. In this case, preparing means just knowing the kind of questions usually asked in this kind of interview. In this article, you are going to see the top 20 python automation engineer interview questions with answers. Those questions are as follows:

1. What does PIP in Python stand for?
Answer: PIP stands for Python Installer Package.


3. What is pep 8?
Answer: PEP stands for Python Enhancement Proposal. It is a set of rules that specify how to format Python code for maximum readability.


5. What is the difference between .py and .pyc files?
Answer: The .py files are the python source code files. While the .pyc files contain the bytecode of the python files. .pyc files are created when the code is imported from some other source. The interpreter converts the source .py files to .pyc files which helps by saving time.


6. What is namespace in Python?
Answer: A namespace is a naming system used to make sure that names are unique to avoid naming conflicts.


8. How do you Install Python?
Answer: To Install Python, first, go to Anaconda.org and click on “Download Anaconda”. Here, you can download the latest version of Python. After Python is installed, it is a pretty straightforward process. The next step is to power up an IDE and start coding in Python.


9. What are Python modules?
Answer: A Python module is a collection of Python commands and definitions in a single file. In a module, you may specify functions, classes, and variables. A module can also include executable code. When code is organized into modules, it is easier to understand and use. It also logically organizes the code.


11. What are functions in Python?
Answer: Functions in Python refer to blocks that have organized, and reusable codes to perform single, and related events. Functions are important to create better modularity for applications that reuse a high degree of coding. Python has a number of built-in functions like print(). However, it also allows you to create user-defined functions.


12. What are Pandas?
Answer: Pandas is an open-source python library that has a very rich set of data structures for data-based operations. Pandas with their cool features fit in every role of data operation, whether it be academics or solving complex business problems. Pandas can deal with a large variety of files and are one of the most important tools to have a grip on.


13. What do you understand about pandas groupby?
Answer: A pandas groupby is a feature supported by pandas that are used to split and group an object. Like the sql/Mysql/oracle groupby it is used to group data by classes, and entities which can be further used for aggregation.


14. What is a classifier?
Answer: A classifier is used to predict the class of any data point. Classifiers are special hypotheses that are used to assign class labels to any particular data point.


15. What is recursion?
Answer: Recursion is a function calling itself one or more times in it body. One very important condition a recursive function should have to be used in a program is, it should terminate, or else there would be a problem of an infinite loop.


16. What is the ‘with statement’?
Answer: The “with” statement in python is used in exception handling. A file can be opened and closed while executing a block of code, containing the “with” statement., without using the close() function. It essentially makes the code much easier to read.


17. What is pass in Python?
Answer: Pass is a statement that does nothing when executed. In other words, it is a Null statement. This statement is not ignored by the interpreter, but the statement results in no operation. It is used when you do not want any command to execute but a statement is required.


19. What is encapsulation in Python?
Answer: Encapsulation means binding the code and the data together. A Python class for example.


20. What is Reindexing in pandas?
Answer: Reindexing is the process of re-assigning the index of a pandas data frame.

This is a trick question, designing Twitter or Facebook NewsFeed is independent of any programming language, yes coding is different in Python than Java but you can use the similar design. If you are asked this kind of question just explain what I have taught you on System design questions, here is a nice diagram to revise how to design Twitter: 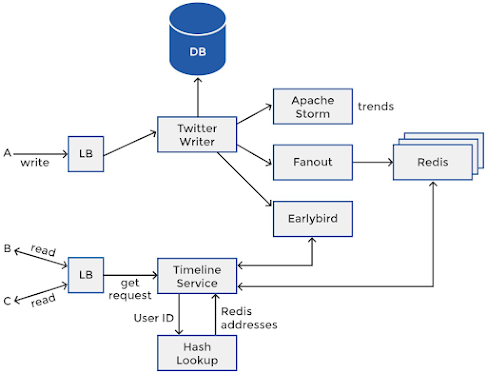 That's all about the Python Interview Questions and Answers for beginners with 1 to 3 years of experience. If you are sure you have grasped everything in the above questions, you have nothing to worry about because you now have all it takes to pass that upcoming interview that is really bothering you. Python automation engineer interview is not as hard as you thought.

So long as you know the kind of questions asked with their answers as well, you will have the confidence to face the interview panel and you will see the difference, and if you need more questions, you can always checkout my big list of 35 Python questions for 3 to 5 years experienced, which also contains bit tough and advanced python questions for experienced developers

Feel free to comment, ask questions if you have any doubt.